A Most Unusual Day 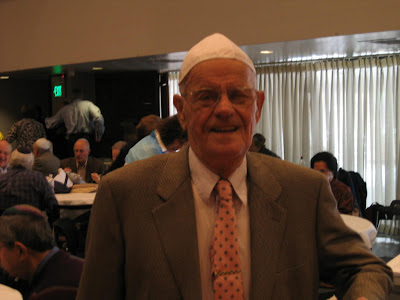 Today my Father-in-law became a Bar Mitzvah. It was a most unusual day.

Sam is 83 years old, and never had a proper Bar Mitzvah as a boy, so he elected to do it now.  Instead of handing the Torah down through the generations, today's ceremony started with handing the Torah UP, from the grandchildren, to the children, to the Bar Mitzvah.  When i heard the plan, it sounded a little corny, but when it actually took place, and my silver-haired husband handed the Torah over to his elderly father, I have to admit it brought tears to my eyes.

All of Sam's children and grandchildren were involved in the service in one way or another. And the members of this Los Angeles congregation did a wonderful job of planning the whole thing, bringing food, coordinating musicians, etc. Our friend from Portland even led folk-dancing, since he happened to be in L.A. at just the right time.

But there was one moment that just cracked me up, because it was so twilight-zone.  The after-meal "benching" was led by well-known radio celebrity Dennis Praeger, who is an active member of the congregation.  It was pretty interesting, because it was almost like a Las Vegas lounge act, with actual applause at the end!  Let me tell you, this guy never met a microphone he didn't like.  So then, I sent a text message to my brother to tell him Praeger was leading benching.  Let's see... can you picture this...  I'm sending a text message on my cell phone (on Shabbes) to say that Dennis Praeger is leading benching at the Bar Mitzvah of my 83-year-old Father-in-law.  What could be unusual about any of that???
Posted by estherbeads at 3:57 PM 1 comment: Links to this post