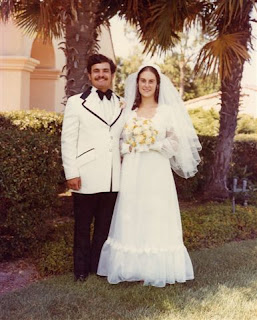 Wednesday was our 36th wedding anniversary. It was also Erev Rosh Hashana. So when my SIL asked "did you celebrate?" the answer wasn't that simple.

Wednesday morning we gave each other anniversary cards, which turned out to be almost the same card. Each had dogs dressed as people, with very similar captions about how after awhile you start looking the same.

Wednesday night we were part of a big holiday dinner at a friend's home, so we weren't really celebrating our anniversary.  But then they surprised us with a special dessert with a candle in it, and everyone sang to us.  It was very sweet.

On Thursday we sang in the choir, then came home to phone calls from people who forgot to call on Wednesday.  Thursday night we ate another holiday meal at someone else's home, and everyone marveled at our feat of remaining married for so long.

Friday evening we spent feverishly preparing for Saturday morning... Gershon was reading a Torah portion, and I was doing a D'var Torah.  Needless to say, neither one of us was prepared. But it was an evening well-spent.

Saturday morning we each did our part in the Torah service.  Then, just when we had both sat down in relief, the Rabbi called us both back up to the Bimah, and did a special Mi Shebeirach in honor of our anniversary.  The entire gathering sang "Siman tov und mazel tov" for us.

Saturday night we went to our friends' house for Mah Jongg, so we didn't have a chance to go out and celebrate together until Sunday night, when we finally went out to a restaurant, ate too much and toasted each other L'chayim. Twice (for 36 years).

No cake or chocolates, no gifts or jewelry or tropical vacations, but actually our anniversary was celebrated by a lot of people. It seemed like it would be lost in the shuffle, but actually it was pretty cool.

Shana Tova to all of my readers (all one of you).  Wishing everyone a happy, healthy, fulfilling year!
Posted by estherbeads at 8:25 AM 1 comment:

Time Traveling on the Couch 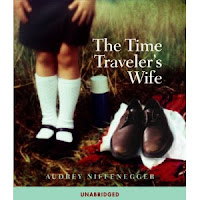 I just LOVE books about time travel!  From H.G. Wells' "Time Machine" to that cool story by Heinlein (sorry, I can't remember the title) to Diana Gabaldon's "Outlander," I love them all.  The idea is fascinating, in either direction.  So I was happy to finally read The Time-Traveler's Wife by Audrey Niffenegger.  I finished it a few days ago, and man, is my head messed up

Each time-travel story has its own set of  "rules."  This one allows the time traveler to visit with his own self at another age!  Yikes!  And because he can go forward AND backward, he can appear to his loved ones even after the date of his death.  Cool, huh?

It turns your head around a few times, but there's nothing wrong with that! It was a fun read, and it also managed to be touching and thought-provoking. I'm not sure if I want to see the movie, though.  I might like to keep it in my head, just the way it is.
Posted by estherbeads at 1:12 AM No comments: