I have a LOT of cookbooks. I love them!  But although I leaf through them in awe, I often fail to actually make a single dish from many of them. Still, the collection looks really impressive in my kitchen

And then there are my beading books... a very similar story. I buy a beautiful book, try to decide which projects I will attempt, and end up making none of them. But they look great in my studio!  Well, after awhile I felt guilty, so I decided not to buy any more cookbooks OR beading books. Until this year.

This year I got more involved in the beading world on Facebook, and saw things that people were creating from recently published beading books. Also, Jill Wiseman published an awesome book of beading projects, and I allowed myself to buy it.  The day that "Beautiful Beaded Ropes" arrived, we were leaving for a weekend at the beach. So I grabbed it and took it with us. All weekend, I browsed the book lovingly, careful not to let the drool fall on the pages!  I thought about which project(s) I would try first, and committed to actually MAKING some of them.

And guess what?  I actually did!  So far, I've made two things, and both are beautiful.  The first one is the "Forever Tango" bracelet, which is a clever herringbone project.  It seemed to take FOREVER (hence the name?), but in the end it was worth it.  Just look at this! 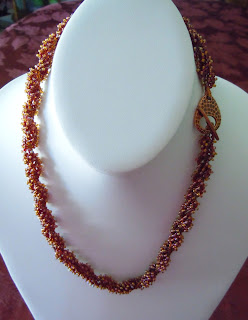 Next, I decided to take on Jill's "Dew Drop Spiral Necklace."  This one went a little bit faster.  It's very hard to photograph well, but in real life, it looks VERY cool! 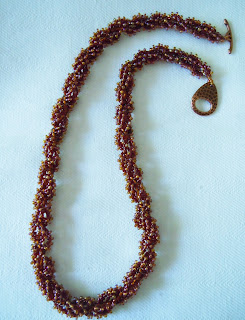 Recently, I also bought Sabine Lippert's "Beaded Fantasies."  I haven't created any of her projects yet, but I promise I will soon!

I'm also thinking of challenging myself to make at least one project from each beading book that I own. Maybe one day I'll do that with my cookbooks too.  Okay, it's not really likely, but it could happen....

Posted by estherbeads at 10:33 PM 3 comments: Links to this post 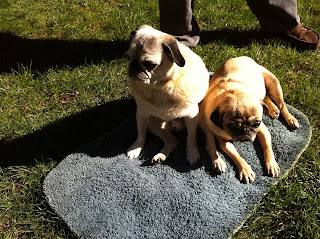 Here are two dogs who don't like each other. I got them to sit together for a moment for the photo, but the body language says it all.
We don't know exactly what happened in Georgie's past, but we KNOW it wasn't good. So, despite her cuddliness with people, she was definitely not comfortable around Nacho.  Very quickly, this became a problem. She seemed to go into some sort of "zone" and would then creep up behind him and attack.

We learned to build barricades between them, and to close one of them into the kitchen if I had to leave the house, or even leave the room.  Sometimes 4 or 5 days would pass without an event, and we would get encouraged. Maybe things would eventually be okay?  But as soon as we let down our guard, she would attack again. Poor Nacho was scared and terribly depressed. I was a nervous wreck, and felt like a prisoner of war.

It was becoming clear that this adoption was a mistake. Georgie needed to be in a one-dog house. I began to reflect on things the foster family had said and done, and I realized that they knew about this situation, and probably had experienced the same problem between Georgie and their pugs. But none of us wanted to put Georgie back into the system. And nobody really wanted to report her behavior, for fear of the possible consequences. What a dilemma!

Well, in May I needed to travel, and needed an appropriate sitter for Georgie. I turned to the foster family, and they agreed to take her for 4 days. As we were planning the details, the foster mother was making jokes about "I don't know if we'll give her back..." I knew she still loved Georgie a lot. So I called her bluff, and asked if she would really be willing to take her back and keep her.

Yikes!  The discussion got really serious real fast. They asked me to sign papers to relinquish her, and said they would take her back and decide if they would adopt her. I came over to sign the papers, return some of her things, and say goodbye to Georgie. It was gut-wrenching. She was so happy to see me, and jumping all over me, and I felt just awful to be leaving her. And the foster family was clearly not happy. What a mess.

I've been very broken-up about this whole thing. I cried a lot for several months. I really felt the need to love and protect Georgie, but it was completely unfair to Nacho. And since she had not stopped the behavior even after 7 months with the foster family, it was clear that she wouldn't stop it with us either. In the end, I think we did the right thing, but I still feel terrible. And a little angry at not having been given the complete information about this dog.

As of our last contact, the foster family has kept Georgie. I really hope it works out for them.

I still want to give a home to an elderly Pug, but now it will have to wait until next year. And when we  try again, I hope we'll really be able to know what we're taking on.

Posted by estherbeads at 9:28 PM No comments: Links to this post