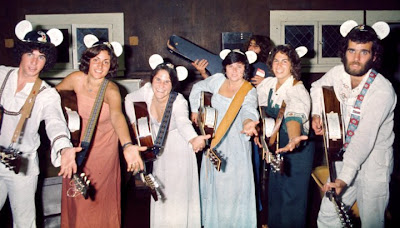 Volumes will be written about the accomplishments of Debbie Friedman, and people will sing her compositions in Synagogues for decades to come. But my strongest memories are from back-in-the-day, when we were in our early 20's, and she wasn't quite famous yet. That's how I will always remember her. And that's the memory that brings a smile to my lips, even as tears flow from my eyes.

Debbie came to Camp Swig in the summer of 1975, and turned the whole place on its head. We already had a strong song-leading program, heavily influenced with the "new" songs of Shlomo Carlebach and the Hassidic Song Festivals in Israel. And we were hearing some new songs coming from the camps in the East, and out of Cantorial schools. And then they brought Debbie in from Olin-Sang-Ruby.

How can I explain? It wasn't just the songs, although many of them were wonderful. It was the woman herself. She was so very energetic, intense, joyful, and determined. How could anyone resist being pulled in? She was clearly a rising star, and we knew we were in the midst of something important. And yet, she did not crush others, nor did she detract from the dance and art programs at Swig. The quietly feared friction between her and our own Debbie Pinto never materialized... they melded and soared together.

I will always picture her galloping around the dining hall, long hair flying behind her, and that beautiful Martin guitar that she held like a weapon of power. I remember her surprise at how cold it was when she first arrived at this Northern California camp... it was laughable, considering where she was from. I remember her glowing as she smiled at me one day over the heads of the campers, during an especially good song session. I remember her irreverent humor.

I never did know the politics behind it, but suddenly Debbie Friedman was a Camp Swig person, and suddenly we were making a camp album featuring her compositions. Here again, it could have been a Debbie Friedman album, but it wasn't. There were a number of songs featuring everyone at camp (see? I actually sang on her first album!), and some featuring various combinations of song leaders. It was a beautiful album, and it still holds up today. The cover was NOT a picture of Debbie, but rather the beautiful Migdal Mayim project that Peretz Prusan oversaw two years earlier.

Of course there are the songs. Everyone knows them, everyone loves them. But one line stands out in my mind above all: "Help us find the courage to make our lives a blessing." In the end, this idea exemplifies Debbie Friedman's life. After a truly life-threatening illness, it took enormous courage for her to resume her life's work. But she found reserves of courage, and indeed God did help her to make her life a blessing. A blessing in the world of Judaism, and a blessing to anyone who ever interacted with her.