On a similar note, I'm working on a new piece of beadwork. And the thread keeps breaking, tangling, or getting frayed. I'm not sure if this is because it's a bad spool of thread, or if it's because it's a Holocaust piece which will be a challenge till the very end. Next time I work on it, I think I'll try a different spool of thread, because this is getting ridiculous.

I must say, though, that so far it looks really good. I think it will be incredibly striking when it's done. Stay tuned.
Posted by estherbeads at 5:18 PM No comments: Links to this post

They say that when bad things keep happening, it often mirrors something going on in your emotional life. Like if you keep having car trouble, or losing your keys, it might point to a problem with the direction of your life. Or if you keep getting sore throats, there's probably a communication problem. Things bursting might mean you're holding something inside that needs to come out. Great, but what does mysterious flooding mean? What does leaking mean? Does it imply... ummm... incontinence? I can't figure this thing out, practically or figuratively. And until someone does figure it out, our home is in limbo. Another heavy sigh...
Posted by estherbeads at 5:07 PM No comments: Links to this post

My son informs me that I shouldn't be so excited about my new kitchen counters, stove, and sink. He says that since I'm a middle-aged suburban woman, having my kitchen re-done is pretty much the law.

I beg to differ. Not everyone gets to do this. And I have been wanting this even longer than I've been middle-aged 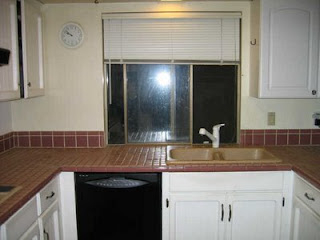 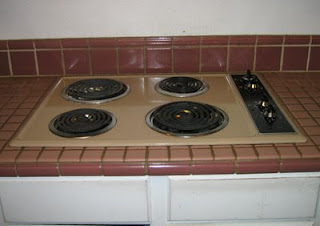 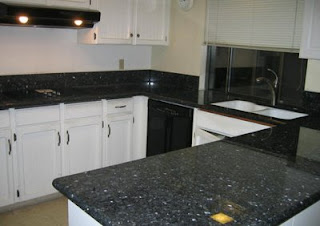 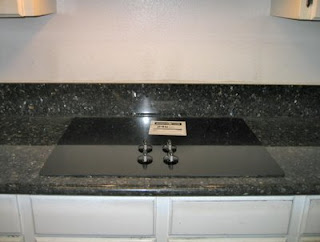 The process isn't entirely over, but we're getting there. And it's such a great feeling every time I walk into the kitchen. I know I'm lucky, and I'm truly grateful.

Molly's in the House!! 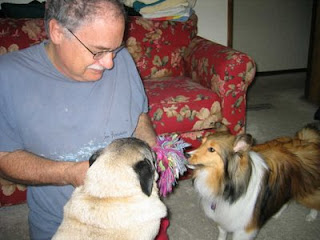 I grew up with all brothers, then had two sons at once, and now we have a male dog. I've never had any other female in the house, except my Mom. So having a female dog with us for a few weeks is really interesting!

Nacho is a "man's man," and is totally devoted to Daddy. But Molly, our guest, is definitely attached to me. And she has such a different aura than Nacho. I could grow to like this! She's young and energetic, but not so territorial. More curious, and also more excitable. Sound like anyone in your house?

Molly is such a sweet dog. But the poor thing is having a rough summer. First, her family's home burned down, with her inside. Luckily the firefighters were told to look for her, and they found her in time. Then she lived in two new & unfamiliar places. Then they brought her to our home and left her in our care for two weeks. Who knows what she's thinking at this point!?

So, it's no surprise that she's a little jumpy at the sound of every little noise. However, last Monday's thunder storm was no LITTLE noise! Personally, it was the worst I've ever experienced. And Nacho wasn't thrilled either. But poor Molly, she went nuts. She started running around the house at top-speed, barking her head off. I was reminded of the book "Marley and Me." I tried to hold her in my arms, but she didn't know me well enough to take comfort from me. She had only been here 4 days. I felt so bad for her. But then I got her up on the bed, and started rubbing her tummy, and she liked that too much to fight it! So she calmed down, and I think we started bonding. With each new thunderclap, I rubbed her tummy, and after a few, she let me hold her in my arms. Then we just sat through it together, Molly, Nacho and me.

Now we're having a good time. I'm sure she still misses her family, and will be ecstatic when they return, but in the meantime she seems more confident here. Nacho has taught her to use the doggy door, and she loves our big back yard. She gets out there and does the sheepdog-thing, running faster than lightning until she collapses. Nacho has also taught her to keep her nose out of his food bowl. He tries to pretend he doesn't like her, but I think he's getting to like playing with her.

Molly's a funny girl, and she has her own little quirks. I'm having fun experiencing her. I just hope we don't have any more thunder!
Posted by estherbeads at 4:06 PM No comments: Links to this post