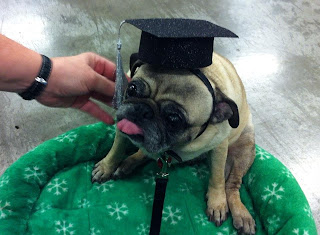 We set out to do all we could for Georgie. We took her to a new vet and got some things sorted out there. Then came the ophthalmologist, which was promising.

And we took her to training class at PetSmart.  This was fascinating. Georgie's had a pretty limited life, and really had no idea of the concept of commands. But of course there's NO truth to the adage that you "can't teach an old dog new tricks." She quickly learned the idea of complying with a spoken command. And she began to learn specific commands as soon as we started to teach her. At home she learned "sit," "come," "up," and "kitchen." She learned to get up and down steps and stairs.  (In time, she also learned to eat more slowly, as she got used to the idea that there would always be enough food, and nobody else allowed near it.)   In class, she also learned "let's go," "leave it," and "park it."

The other dogs in the class were puppies, and the hardest thing to teach them is loose-leash walking. They always want to tug on the leash and run ahead. With Georgie, the opposite was true, and it was pretty funny. The challenge was to get her to come along, without ME tugging the leash!  But by the end of the class she was getting pretty good at "let's go." We were all very proud when she "graduated" from puppy training class.

But there was one thing we couldn't teach her, and it broke my heart....
Posted by estherbeads at 8:43 PM No comments: